Although Columbo was a real police officer, I always think of it as more of a cozy than a regular dyed in the wool police drama. Columbo was an awesome show only because the actor, Peter Falk’s part was a hoot. He acted like he was dumb to get to the bottom of his cases, and got his man. Here’s some information about him.

Wearing his signature trench coat and clutching his ever present cigar, Lt. Columbo is one of the most memorable detectives in the history of television-even if we never found out his first name. Played by Peter Falk, Columbo was in our living rooms off and on for nearly 30 years. Even now, long after its last made for TV movie in 2003 and the death of the Falk in 2011, Columbo airs in the form of classic reruns on channels such as MeTV. We can’t get enough Columbo. 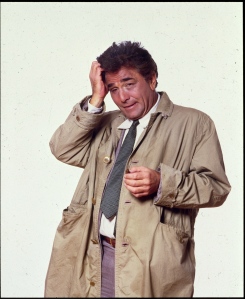 What separates Columbo from the myriad of other detective shows? While Lt. Columbo’s style and amiable attitude are certainly part of it, the main difference between Columbo and other shows is the formula used to unravel the mystery. Most mystery shows begin with an outsider finding the body or even a depiction of the murder that doesn’t show the killer’s face. Columbo, on the other hand, showed viewers not only the murder, but also the perpetrator. This “inverted detective story” let viewers concentrate on Columbo’s actions rather than the identity of the killer and created a character-driven show.

And what a character Columbo was. As a kid, Columbo was a juvenile delinquent, constantly playing practical jokes and “too much pinball.” All that changed when Columbo was drafted into the Army during the Korean war. This experience seemed to set him on “the straight and narrow,” and when he got home he joined the LAPD. Rising quickly to detective, then Lieutenant, Columbo garnered department wide fame for being able to solve even the most difficult cases. Despite this, Columbo remained a Lieutenant, something that was frequently commented on by other police. Columbo, however had no desire for promotion, and loved being a detective; his lack of ambition became on ongoing joke.

With his wrinkled trench coat and generally disheveled appearance, Columbo was often mistaken for a bum; something he used to his advantage. Presenting himself to suspects as an incompetent, but amiable detective, Columbo’s appearance belied a sharp mind and attention to detail. Confident in their ability to outsmart the hapless Columbo, suspects (most of whom were rich or powerful) freely gave alibis that were on the surface airtight, but with a little investigation turned out to have holes that could easily be exploited.

As Columbo uncovered more and more evidence of guilt, he frequently returned to suspects “for just a bit more information” and would slowly erode their alibi. Despite his outward kindness, this Socratic Method style of questioning would eventually upset suspects so much that they inadvertently admitted to committing the crime in a fit of rage. Even after they were caught, Columbo kept his cool, often expressing admiration for the killer’s intelligence. 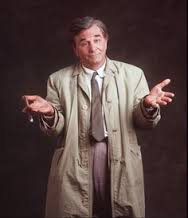 Columbo never used a gun (in fact, he didn’t even carry one), but unlike other “sexier” detectives, Columbo had more brains than brawn. Despite this, Columbo’s innovative story telling and intriguing characters, makes it one of the one of the most well known and beloved detective shows in television history.